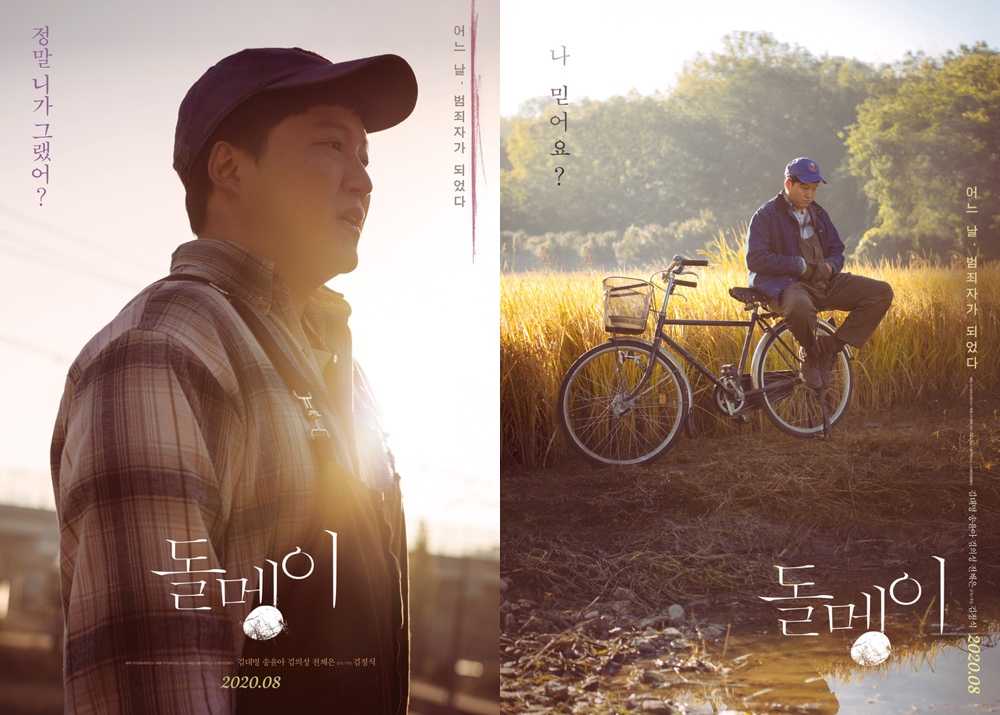 Release date and two teaser posters added for movie “Stone Skipping” starring Kim Dae-Myung, Song Yoon-A, and Jeon Chae-Eun. The first poster witth the closeup of Kim Dae-Myung has captions that states “Did you really do it?” and “One day, he became a criminal” and the second poster has captions that states “Do you trust me?” and “One day, he became a criminal.” Teaser trailer has been added at AsianWiki.

Filming for the movie took place back in 2018 and the movie had its world premiere at the 2018 Busan International Film Festival. The film’s general release date is now set for August, 2020 in South Korea..

Plot Synopsis by AsianWiki: Seok-Goo (Kim Dae-Myung) is a man in his 30’s, but has the intelligence of an 8-year-old. He runs a rice mill in a village, where kind neighbors and friends live nearby. One day, he sees a runaway girl, Eun-Ji (Jeon Chae-Eun) who is mistaken to have been a pickpocket at a village party.

Seok-Goo helps her by resolving the misunderstanding. He and Eun-Ji become friends afterwards. Teacher Kim () is a teacher at a shelter where Eun-Ji stays. Teacher Kim is worried about the friendship between Seok-Goo and Eun-Ji, but a Catholic priest (Kim Eui-Sung) sets Teacher Kim’s worries at ease.

One evening, something happens to Eun-Ji at Seok-Goo’s rice mill.