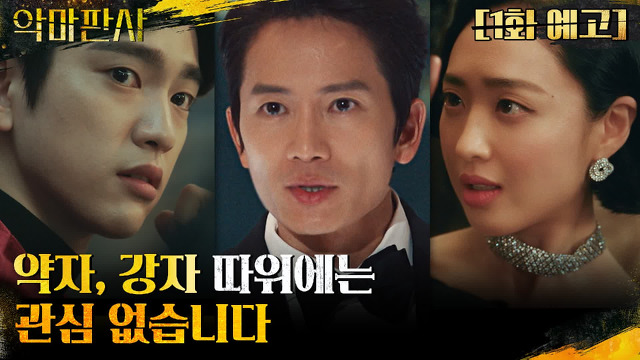 Ep.1 trailer added for tvN drama series “The Devil Judge” starring Ji Sung, Kim Min-Jung, Jin Young, & Park Gyu-Young. The trailer begins with Ji Sung as Judge Kang Yo-Han stating “It is sad, but there isn’t justice in reality. There is only unfair games.” Below are still images of Ji Sung in the drama series.

Plot Synopsis By AsianWiki: During a time of chaos, a judge turns the court into something like a reality show and punishes evil people mercilessly.

Kang Yo-Han (Ji Sung) is a judge. He has an aristocratic appearance and elegant taste. He punishes corrupt and greedy men with power. Kang Yo-Han a secret.

Jung Sun-A (Kim Min-Jung) is an executive director of the Social Responsibility Foundation. She is smart and beautiful. She is also Kang Yo-Han’s enemy. Jung Sun-A is involved with important people from various social circles like politics and economics. She has the power to control the country by using her relationships.

Kim Ga-On (Jin Young) is a rookie judge. He has experienced difficult times since his parents died when he was a child, but he was able to become a judge after expending great effort.

Yoon Soo-Hyun (Park Gyu-Young) is a detective. She is Kim Ga-On’s long time friend and she chases after Kang Yo-Han’s secret.